BUNDLE OFFER: GET SUPPOSITORIES AND 15% RAW HEMP OIL WITH 30% OFF. USE COUPON CODE: SLOVE 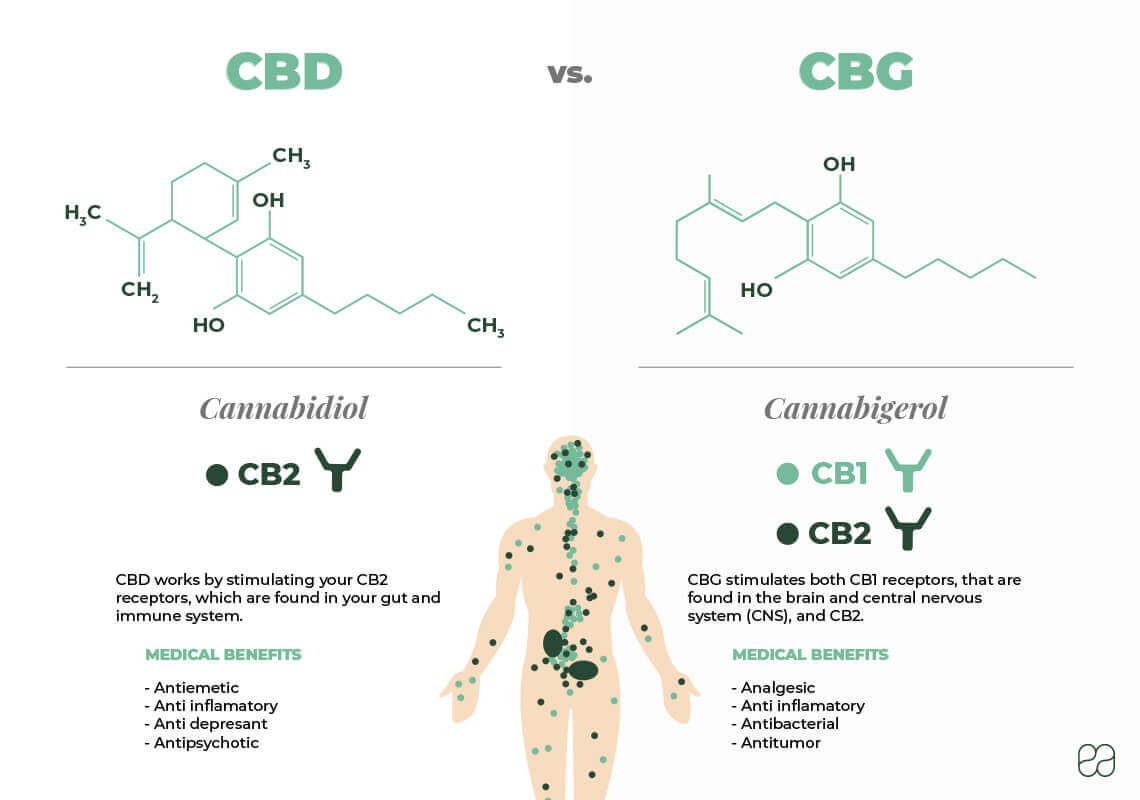 As we learn more about the wonderful benefits of cannabis and gain more of an understanding of it, our knowledge of cannabinoids also expands. The main cannabinoids you have probably heard of before are THC and CBD. There is a ton of information out there on THC and CBD.  However, there are other lesser-known cannabinoids that people are also getting curious about, like Cannabigerol (CBG).

There has been some promising research that CBG may share several beneficial characteristics with CBD. They both are non-intoxicating cannabinoids that have antioxidative and neuroprotective properties. CBG is a less prevalent cannabinoid but it has also been shown to help with inflammation and even slow the proliferation of some cancer cells. When taken together CBD and CBG offer impressive anti-inflammatory benefits that treat neuroinflammation.

You may be wondering what are the similarities and differences between these two cannabinoids? Keep reading to learn more!

CBG stands for cannabigerol. This compound is one of more than 120 cannabinoids found in cannabis and was first isolated in 1964. There is still not a lot of research on CBG but there are some studies showing that it holds many therapeutic benefits. CBG’s pain-relieving properties might surpass that of THC but without the psychoactive effect. There also is some evidence suggesting that it could offer other benefits with its antidepressant and antibacterial properties.

All cannabinoids found in cannabis come from the cannabigerolic acid (CBGA) through a process called decarboxylation, CBGA becomes CBG, thus enabling the cannabinoid to interact with the cannabinoid receptors of the body. Researchers have discovered that CBG has an affinity for the CB1 and CB2 receptors. It may also stimulate receptors that influence heat sensitivity, pain, and inflammation.

CBD stands for cannabidiol and is the second most prevalent active ingredient in the cannabis plant. In medical marijuana, CBD is an essential component. CBD comes from the hemp plant, a cousin of marijuana. Unlike THC, CBD does not cause a “high”. According to the World Health Organization, there is no evidence to date of public health-related problems associated with the use of pure CBD.

CBD offers a range of therapeutic properties which have captured people’s attention around the world. It does not impair cognitive function, unlike THC. Because of the entourage effect, CBD paired together with THC generally allows for more significant therapeutic benefits than either one their own. It is possible to take the two together without experiencing psychoactive effects. CBD acts on the endocannabinoid system. However, the effect it has on the body is still not completely understood.

What is the difference between CBG and CBD?

After reading about CBG and CBD you may be wondering what are the main differences between the two. CBG and CBD differ in several ways:

Appetite stimulation: One-way CBG is different from CBD is appetite stimulation. Some research done on rats has shown that CBG encourages animals to eat more than double their normal food intake. Another study showed that CBG didn’t great any changes to the feeding behavior but that cannabidiol reduced total food intake. More research is needed to understand the effects on appetite.

Molecular Structure: Cannabidiol and cannabigerol have different molecular structures. Meaning their arrangement of hydrogen, carbon, and oxygen atoms that make up the cannabinoid are different. This results in CBD and CBG binding with the body’s cannabinoid receptors in different ways.

Can you take CBD and CBG together?

The short answer to this question is yes! You can take CBD and CBG together. By taking them together you can take advantage of the entourage effect. Simply put, this effect occurs when the cannabinoids can work together and enhance the effects of one another.

As more people are experiencing the benefits of CBD firsthand and interest in other cannabinoids rises, it’s expected that more research will be done and new discoveries will be made about the therapeutic and healing properties of cannabis.

« Where is CBD legal?