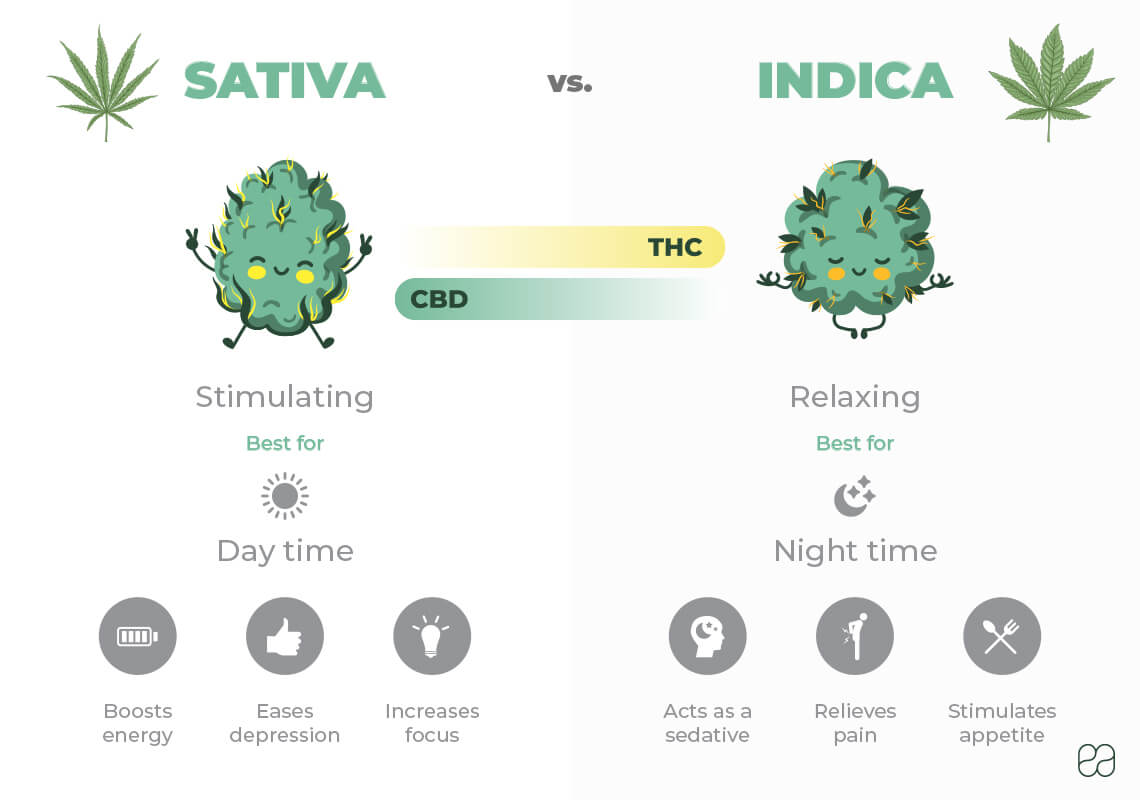 Cannabis is becoming increasingly popular in the world and is also facing much less stigmatization than previously. People are becoming more accepting and are also developing an interest in the different varieties and how their effects vary. It’s important to understand the different types of cannabis plants available and how each can be helpful. There are some varieties of cannabis that are better suited for specific ailments over others. When using cannabis to support your wellbeing it’s good to understand the plant and how its effects can vary depending on the variety. So to start with let’s dive into the difference between Indica and Sativa.

Difference between Indica and Sativa

Cannabis indica and cannabis Sativa are two different species of cannabis. They share some similar features but also have their unique differences. There is some anecdotal evidence saying that India is more calming and Sativa is more energizing but experts have spoken out about how this statement doesn’t give the full idea.

Other factors are at work when it comes to creating a specific effect than just the strain. Let’s take a more in-depth look at the difference between each strain and the effects they produce.

Indica versus Sativa for Pain

The plant Cannabis indica was originally found in the Middle East in places like Afghanistan, Tibet, and Pakistan. Generally, it has a higher amount of CBD than Cannabis sativa, but the CBD to THC ratio is close to 1:1. In physical appearance is a shorter and bushier plant. The leaves are also shorter and wider. There are several medical marijuana strains that contain a hybrid form of this strain. It’s thought that Indica is effective for pain relief and provides a relaxing high thus helping with sleep. However, it’s important to keep in mind that little scientific evidence backs up these ideas.

There are many variations within the Indica and Sativa categories so it’s important not to generalize the effects of the strains.

Cannabis Sativa traditionally comes from warmer climates such as Central and South America, and Southeast Asia. Physically the plant is taller and slimmer than Indica and the leaves are longer and thinner. It’s thought to produce more of an uplifting and euphoric high and generally be more energizing. But as we mentioned before these are just generalizations and there is little scientific evidence that supports these claims.

As with the indica strains, there are various strains within each species that have different effects. A higher ratio of THC to CBD is found within the Sativa plants.

As you may have already heard, cannabinoids are chemical compounds found in the cannabis plant and are also produced in the human body. Cannabinoids create an effect by interacting with receptors found within the central nervous system. They help regulate how cells communicate. Some examples of cannabinoids include cannabidiol (CBD), cannabigerol (CBG), and Tetrahydrocannabinol (THC). There are at least 113 different cannabinoids that have been isolated from the cannabis plant which work to create different effects on the body.

Many different types of hybrid forms of Cannabis indica and Sativa exist. Nature and growers have both made different hybrid forms. New hybrids have been made for a variety of reasons such as for plants to grow more quickly, balance the effects of the plant, and improve the yield.

New discoveries are constantly being made about the cannabis plant and research continues to emerge on how this plant affects the human body.

CBD Infused Edibles – What are they? »